SystemDataScope is a GUI for visualization of collectd datasets. Together with collectd and RRDtool, it provides a system monitoring solution for Sailfish. Upgrade and this release notes are below. See also below for possible problem with SFOS 2.0.2 upgrade.

SystemDataScope reads the system performance data gathered by collectd. Graphs are generated using RRDtool and shown through provided GUI. If collectd is started by a GUI user through systemd, there is a support for starting/stopping the daemon.

Through process plugin of collectd, each program can be monitored with its RAM, CPU and disk access logged and shown on graphs through longer timespan.

The recorded statistics are kept with different time resolutions allowing to keep short-term (hours) as well as long-term data (year).

SystemDataScope can be used to generate report images that can be used for giving feedback on performance of your device or monitoring results on an app(s) that you selected in collectd configuration. By selecting "Report" in pulley menu, you would initiate generation of the graphs that will be stored, in Sailfish, under /home/nemo/Documents/SystemDataScope/TIMESTAMP. When the report graphs are all ready, a message will appear in SystemDataScope. With the file manager or Gallery app, select and send graphs that you want to share and delete the folder /home/nemo/Documents/SystemDataScope when not needed. This folder will be created if its missing the next time you would need a report. An example report graph is shown as one of the screenshots below.

The collected statistics are organized in a tree. In the beginning, a list of graphs on a top level are shown. By pressing on a graph, a detailed information regarding that statistics is shown on a list, if it exists. At present, using such scheme, there are three levels used.

The default configuration for collectd provides data on:

SystemDataScope is build to support multiple different log configurations. The configuration is setup through JSON file that can be autogenerated, specified by user, or downloaded from URL (local or remote). This should facilitate development of the graph generation scripts that are tailored for specific user setups.

Since some statistics are populated as you use the phone, such as used mobile network type, regenerate the configuration after a while again to see the corresponding radio signal strength.

The current implementation is developed on Linux Desktops and Sailfish OS mobile devices.

To get support for new collectd plugins, just regenerate graph configuration. Note that the new stats have to be supported by the generation script.

For details, see collectd OpenRepos page ( https://openrepos.net/content/rinigus/collectd ), under upgrade notes. In short, for default collectd configuration users, please delete the old datasets and start with the new default configuration (will delete earlier data). For that, stop collectd and remove /home/nemo/.local/share/collectd ( in terminal: rm -rf /home/nemo/.local/share/collectd ) and start collectd again. While the data will be lost from earlier recordings, new databases will be initialized allowing you to record data for 1 year.

As StateFS is not installed by default, users have to install the missing StateFS support:

Reboot after installation. After that, collectd will be able to start normally.

This may concern users who have been using collectd/SystemDataScope before upgrading SFOS to 2.0.2. On my device, the upgrade from 2.0.1 to 2.0.2.51 resulted in a change of a hostname from Jolla to Sailfish. As a result, collectd started to record under different folder with the graphs not updated in SystemDataScope. If you have the same problem, stop collectd, move your records to the new folder under .local/shared/collectd, delete old subfolder from where you moved the records, and regenerate the graph definitions in Settings. Start collectd and your old records will be updated as before.

Hopefully, Jolla will not be changing SFOS hostname default frequently. Otherwise, you could also set the hostname or specify folder in /etc/collectd.conf . 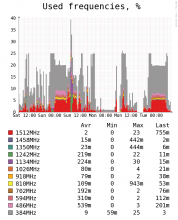